I seem to be hearing a lot of stories of people being stressed out because their provider has, unnecessarily, put the fear of God into them. 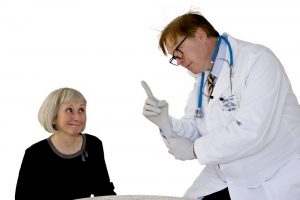 Is He Putting the Fear of God in You?

Friend Jane (not her real name), a 69 year old diabetic was being checked out for liver problems. She was sent for a fibroscan of her liver to check for fibrosis/cirrhosis.

This is a refined ultrasound that can detect fibrous tissue (fibrosis) by the stiffness of the liver. And fibrosis correlates with cirrhosis – which is when irreversible fibrous scarring leads to liver failure.

The alternative is a liver biopsy, which is a slightly brutal procedure where you stick patients with a large needle to get a sample of tissue from the liver - but which can make them bleed, cause infection or skewer the nearby vital organs like the lung or gall bladder, and undesirable stuff like that. The fibroscan can often avoid doing this biopsy.

Jane’s fibroscan report came back showing “F4 fibrosis/cirrhosis” which is the worst on a scale of 1-4. The Nurse Practitioner that Jane saw for the results, told her she had pretty advanced cirrhosis, and should be thinking about a liver transplant. 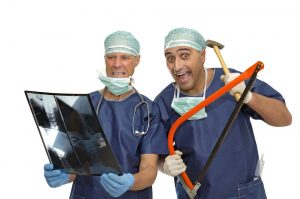 The Surgical Team is Ready to Operate

As this seemed a little incongruous with her clinical state, liver biopsy was recommended to get a better handle on how bad her liver was.

“You’re Due for an Event”

Another friend, Bill (also not his real name), who is a little overweight, with slightly high blood pressure, was sent for a nuclear stress test because he had some chest pains.

The stress test came back negative, but when he went to see the cardiologist’s Nurse Practitioner, she told him, three timesin the course of the consultation, “you’re due for an event.” 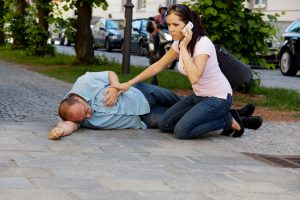 The Event You Don't Want

She was trying to talk him in to taking statins for his slightly high cholesterol.

In his book Doctor You: Introducing the Hard Science of Self-Healing, Jeremy Howick; Director of The Oxford University Empathy Program (a book I bought after I’d heard him on ‘The People’s Pharmacy’ on NPR) notes “the words doctors use and the way they treat patients can have positive or negative effects.”

Many people are aware of the placebo effect. Well it has a sinister twin – the noceboeffect, where if you believe something is going to have a bad effect on you, that’s enough to make it happen (like being warned of all the side effects of a drug). Or if your doctor tells you in uncompromising terms that you’ve likely got something serious wrong with you, the anxiety is liable to make you ill.

Howick quotes studies of patients with back pain where the doctors were empathetic to half the patients, and not to the other half.

I’m sure you’re not surprised to learn the patients where the doctor was being nice did better.

Quite apart from the fact that there was this complete discrepancy between the fibroscan and the liver biopsy (I found reports that the scan has a specificity of 85 percent, so that would mean  a possible 15 percent false positive rate), the nurse practitioner presenting this to Jane as her definitely having severe cirrhosis, and talking liver transplant, was liable to mess her up in itself (somatic symptom disorder bears testimony to the profound effect our psyche can have on our bodily health).

Or in Bill’s case, the nurse practitioner trying to scare him into doing what she thought was the right thing, seems inappropriate. Rather she should list the pro’s and cons and let him decide if the benefits of statins outweigh the potential risks (every treatment decision is a risk/benefit calculation – a decision that you are usually better at making for yourself, taking in to account your own values and specific goals. You just need the necessary information.

Your Doctor May Not Know 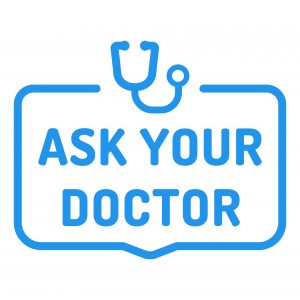 This Is What People Are Always Advised

Though it is very common for people to be advised to “ask your doctor” – in advert’s and advice columns etc - all too often, their doctor/provider doesn’t know. Or know in sufficient detail.

Your doctor may not be sufficiently conversant with the probabilities of this or that outcome as to be able to help the patient make a rational decision.

Your doctor may know roughly the risks and benefits. That statins can cause muscle problems or diabetes. Or liver biopsy can cause the complications I mention. But to really make a rational decision, you need to know how likely it is that you will have a heart attack. How likely it is Jane will get bad cirrhosis or have a complication form the liver biopsy.

One specific statistic that is good to know in this regard is number needed to treat. This gives a good “feel” for the probability.

Unfortunately, the fall back position is for doctors/providers to take some dogmatic stand that you “must” do this or that, rather than admit they don’t really know the probability – or won’t find out, or take the time to explain it to the patient.

I have to admit finding those statistics for a specific case –as patients have this cussed habit of all being individuals and all being a little bit different – does make it difficult.

But usually the decision making is sufficiently complicated that the doctor/provider is not justified in pushing some one intervention as what must be done – and especially if it scares the tar out of the patient.