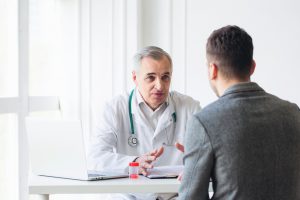 The Doctor Needs to Know the History

At the risk of pontificating, this was a lesson reinforced by visiting local neurologist, D. P., and him telling me how the history he took from patient John lead him to the conclusion that the orthopedic surgeon was wrong.

It is a common gripe amongst we old doctors about the “youngsters” these days. They rely on tests rather than history to figure out what’s wrong with a patient. Even D.P., after he’d finished explaining the finer, neurological points of John ’s case told me “Everyone relies on imaging” – by “everyone” he is really referring to the newer neurologists in town. “They often won’t even see a patient until they’ve had an MRI scan or an angiogram.”

John P. was a good example of the merit of a good history. He had developed severe back and leg pain while working a s “re-binner” at Amazon. “Pain that felt like someone had hold of my spine in two places and was twisting in opposite directions” so that “I was hissing through my teeth and it took three shots of morphine in the ER to get me through an MRI scan.”

The orthopedic surgeon had reviewed the MRI scan of his lumbar spine, but it didn’t show any specific pathology, and she was treating him with physical therapy – which wasn’t getting him any better. So she was all set to give him a cortisone shot, for whatever was wrong with him, the reassurance that “it will probably work. “

However, John is someone with a fairly analytical brain and who likes to make decisions on his own fate (and therefor is a truly appropriate for a “medically emancipated” patient). He is also on blood thinners/anticoagulants for an artificial heart valve, and wasn’t excited about the idea of having large needles stuck in him – especially when no one really knew what they were treating. .

He told his orthopod he wanted to go to a neurologist.

When D. P. took his history, “he told me he had problems with his equilibrium, numbness, tingling and pain in both legs, and saddle numbness (i.e. numbness of roughly the part of your butt and crotch that would be in contact with a saddle if you were on a horse). This didn’t jibe with just something going on in his lumbar spine he told me.

Exam findings of some deep tendon reflexes being absent, and some increased merely confirmed his conclusion that he had findings suggesting the problem wasn’t just in the lumbar spine. He had “both upper and lower motor-neurone signs” he told me, with a certain degree of self satisfaction.

What came next exemplified another bit of medical wisdom. 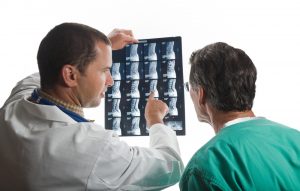 Excuse Me, But Did You Miss This?

Prompted by his findings, D. P. looked at the MRI scan again, and noticed “ a white spot in the cord on the T2 images at the T11/T12 region.”

In other words he spotted something in the spinal cord, but above the lumbar spine (at the very bottom of the thoracic spine) which the radiologist had not noted.

“It’s not so uncommon to have to call the radiologist and ask them to look again at a particular place” he told me. “It doesn’t make us very popular” but it illustrates the point that as a neurologist, you have to be able to read an MRI scan for yourself and not rely entirely on the radiologist’s reading.

An MRI of his thoracic spine showed a slipped disc pressing on the spinal cord. A laminectomy decompressed the cord and now he is on the road to recovery.

At the risk of sounding like a persnickety old fart, a medical history is a very precise tool for figuring out what’s wrong with someone. It can be long winded and in this day and age of conveyer-belt nano-second medicine, and tends to get replaced with the much quicker – and often more lucrative – business of just ordering tests (D.P. told me he spent 80 minutes gathering information on John P., which for what you get paid for “cognitive services” as opposed to doing procedures, is liable to make any practitioner go broke).

He did tell me however, that a case as teasing as this only comes up about once a decade. It was what in the profession is calls a “fascinoma.”

And dare I say it, because the history – and its exact details - is so important, this is often why a doctor will interrupt a patient, even though they may be in full “song. To keep them providing useful details, and not veer off on all the other stuff like where they were going, who with, what they were wearing. All that stuff the patient thinks so important but which doesn’t help solve the mystery.

So make sure your doctor hears your story – but keep it succinct and relevant.