Mouthwash and Medicine – Our Family Roots in Germany

It is bizarre if not gratifying to know that a mouth wash called Odol played a significant part in our family history – or at least the fortune it made for a pre WWII industrialist in Dresden, Germany played a part.

This discovery is of interest partly because it shows there were gullible people and fortunes to be made questionable pharmaceuticalsl, even in those days. But mainly because it is one of many things my sister Angie and I found out about our forbears, our progenitorial DNA, on a recent trip we took to places in Germany that have significance in our family history.

The first stop was Leipzig. Here we met up with a bunch of Aussie’s from the Henry Handle Richardson Society. They have an interest in our great aunt Henry (a nom-de-plume she had to adopt as a necessity colonial Australia where women were not expected to write serious novels) who is now a much revered writer in the Antipodes – but whose mother moved her and sister Lil (our grandmother), as teenagers from the outback of Australia, to study music in Leipzig when our great grandfather (an Irishman and doctor who had emigrated to Australia in the gold rush) had died – probably of syphilis, though that is a bit of family history not so much talked about. 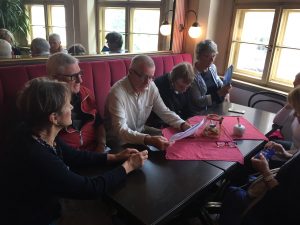 australians from the Henry Handle Richardson Society plan their strategy over coffee and cakes. 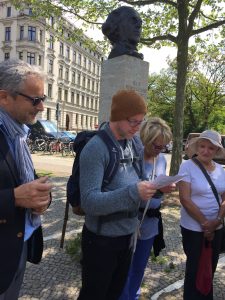 Readings of relevant passages from 'Maurice Guest' - Henry's novel about coming to Leipzig to study music (her description of the music academy as we stand across the road from it) which Stefan - in foreground - is translating in to German.

As siblings go, Angie and I are pretty good travelling companions – even if she does have some kind of mental block or animal-magnetism that makes her and technology totally incompatible (I have rescued many of her cars in my youth, and letting her navigate on Google Maps on her phone, or try to get money from the ATM was harrowing). 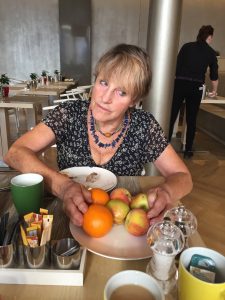 Sister Angie goofing when I told her I thought it wasn't cricket to secret lots of fruit from the breakfast that was included.

Or, at the risk of sounding yet more unkind, an ability to be oblivious to what is going on in the immediate environment when reading or conversing – as happened with Irmgard, our also somewhat loquacious minder in Munich, who had been enthusiastic about Angies routine of starting the day with a double shot cappuccino. Perhaps no surprise we missed the stop for the Jewish Cemetery. 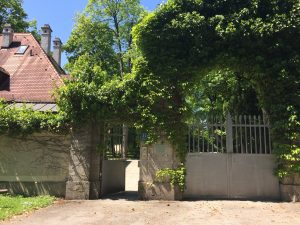 the Jewish cemetery we nearly missed from coffee driven dialogue

After Leipzig it was on to Dresden, to learn how Karl August Lingner, the inventor of Odol, had an interest in hygiene and sought for a collaborator to put on an exhibition. Our grandfather, Otto, who was an ophthalmologist in Munich at the time, likewise was an enthusiast.

A Germanic View of Hygiene

“Hygiene” in that time and place was about encouraging people be healthy. But also, with a rather Germanic, moralistic, twist it incorporated an imperative to lead a righteous life.

Hygienists of the time wanted to eradicate the “epidemics of criminality and alcoholism.” To extricate humanity from the “filth of urban centers, malnutrition, disease and sexual vice,” and encourage everyone to have the physique of a perfectly proportioned Greek god – no pot bellies; no saggy buts here.

We knew something of Otto’s history in Munich, and that he had an interest in hygiene, but didn’t know that Lingner had recruited him to move to Dresden to be the principal organizer of a hygiene exhibition that happened in 1911, and was a great success with 30 countries participating; 100 custom built pavilions and 5 million visitors.

Motivated to do some in-depth digging on the Internet, from our hotel room in the Hyperion Hotel in Dresden, we were excited to discover an article in the Journal of Science, Technology and Medicine about the “Organising and History of the Internationale Hygiene-Ausstellung.” This spelled out Otto’s role in this exhibition – and get us fired up to go visit the modern day Deutsches Hygiene Museum, for which the exhibition was the nidus.

Despite 80% of Dresden having been destroyed in reprisal bombing raids by the allies against Hitler’s Germany, what we saw of Dresden when schmoozing around the night we got there, was an elegant place.

A waterfront piazza was enlivened by a disheveled, but musically harmonious brass quartet playing Pachelbel’s Canon as the sun went down over the River Elbe. We joined happy, relaxed diners at tables set on the cobbled streets. And innumerable clocks in surrounding church spires rather quaintly chimed each hour – though all at slightly different times in, a rather un-Germanic way. 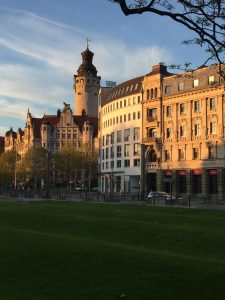 Leipzig not Dresden - but still a town of chiming church clocks

Next day a short but rattling tram ride and a short walk brought us to an imposing, square building, with columns and high portico, where architect Wilhelm Kreis had emphasized pre-war German austerity. And the naked statue of the “Ballwerfer” (ball thrower) on the forecourt, foretold of the coming of the Nazi’s, the master race, and co-option of both the museum, and the notion of hygiene, to their own perverted celebration of eugenics.

Inside, left over from the original exhibition, is the Gläserner Mensch (“glass man” - actually a see through woman, with buttons to push light up her various parts – on this occasion swarming with raucous school children, delighted to have found the button to illuminate her genitalia). 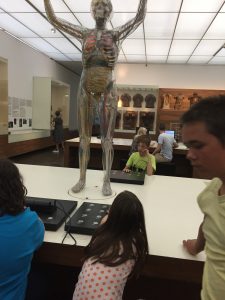 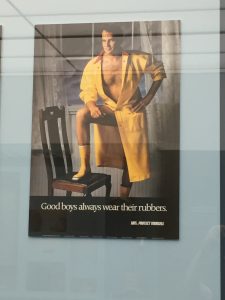 Hygiene with a sense of humor 1. 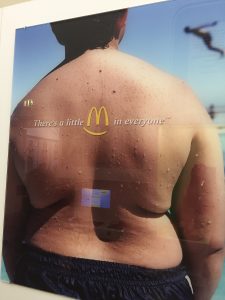 Hygiene with a sense of humor - and a message 2.

Another throw back to what we know of Otto’s interests was a display of the unhealthy effects of tight corsets - with bizarre images of how the Venus de Milo would look with a wasp waist.

On other parts of our travels we learned Otto was a bit of bohemian, living with Lil in the Dresden garden city suburb of Hellerau, where Lil helped A.S. Neill set up the progenitor of his radical “do-as-you-please” school, Summerhill, in a Dalcroze school there.

I was also interested to learn that Otto was a bit of a philanthropist, who also donated his time to a free clinic - but in Munich, in what was called the “ambulatorium.”

There was much talk, especially with the Australians, of many aspects of the family’s doings, relationships, likely stresses and characteristics. All a bit introspective, but interesting - to Angie especially who wants to write about the interaction of sisters Lil and Henry. But we couldn’t help seeing parallels between prewar Germany and the present.

Otto, being Jewish, and living in pre-WWII Germany, found himself in a situation that became steadily more precarious. He was replaced in his role as organizer for Lingner, ostensibly for lack of formal credentials in hygiene. By this time he and Lil had become divorced, but Otto was savvy, or lucky, enough, to have married again, but to an American, and was thus able to get a visa to the US - or I presume I would not be writing this.

The parallels we saw with those early days of Germany and the Nazi’s anit-semitic/ xenophobic philosophy, and the skillful manipulation of the media made us think of the gullibility of today’s voters who have brought us Brexit and Trump – maybe we need a re-run of the tactic used by General Patton to show the complacent people of the area the full horror of what they allowed to happen, by their actions or inaction.

The story was told by Stefan Welz, a German scholar from the English Language department of University of Leipzig, who is translating Henry’s first novel (Maurice Guest) about her experiences of coming to Leipzig to study, and who was acting as our guide on a day trip from Leipzig to visit Weimer. He told how Patton marched the people of Weimar the 5 miles, to the nearby and recently liberated concentration camp of Buchenwald. And here broke down their denial by showing them what horrors their supposed ignorance had allowed in the form of starved and the rotting corpses. 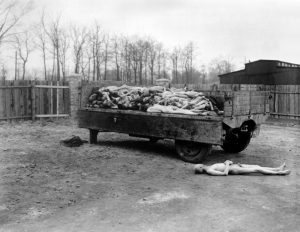 the kind of scene the people made to visit Buchanwald saw

A brief visit to Berlin brought to mind the other parallel between then and now as we visited Checkpoint Charlie and learned about the evils of walls. 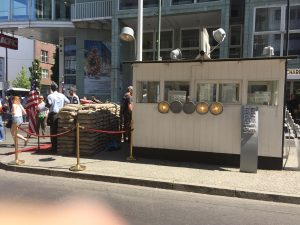 Checkpoint Charlie - a reminder of the evil of walls

Last leg was Munich, where Irmgard showed us every house or the site of every house, that some one or other member of the family lived – there seemed to be a lot of them and they seemed to move around a lot. We also visited the area of the bohemian arts community of Schwabing that both Lil and Henry were drawn to. 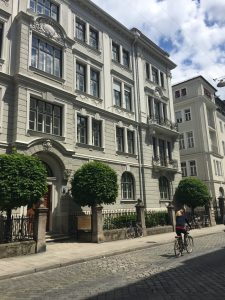 One of innumerable houses our relatives lived in in Munich

Then back to the homeland and a few days stopover at Angie’s house in Islington London, where more peripheral relatives were not quite so excited as we were with the fascinating stuff we had found out about the family.

Angie and I both agreed that this fervent interest in genealogy and family history is probably a sign of us getting old.