My brother-in-law Olly, a Dutch ex-merchant mariner is a bit of a character. But also a bit of a hypochondriac. 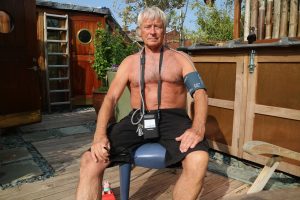 The Picture of Health?

When Paula and I went to England for Christmas , the whole family decamped to stay at Fingals Hotel, which describes itself as  an “eccentric, quirky, luxury country B&B” in a manor house mentioned in the Doomsday Book.

Owned by friends, located in the rainy green hill of Devonshire, with no cell phone service, it is a calm and tranquil place. Nonetheless my sister, Angie, came to breakfast the day after Christmas and announced “Olly had rather a bad night.”

Olly has had atrial fibrillation and high blood pressure and worries about his health. So I offer to do a “house call” and found him laying in the large double bed, blood pressure cuff on one side; stethoscope on the other; bottles of pills arrayed around on the counterpane, rummaging through a WWII era Dutch first aid bag looking for medicines.

Finally he produces his emergency supply of atenolol, tightly wrapped in duct tape. This is a beta blocker that he was meant to be taking to control both his blood pressure and his heart rate. We joked about “too bad if you died because it took so long to get the duct tape off.”

He was also frequently consulting his smart phone on which he had an app, Preventicus, which uses the camera like a pulse-oximeter to assess blood flow in the finger to tell you heart rate and rhythm.

His pulse was slightly irregular, but rather unhelpfully the app said “possible atrial fibrillation.” And his blood pressure was too high. He was all steamed up

can be caused by anxiety. My impression was the more Olly checked his heart, the more anxious he became and the worse things got.

It was something of a Catch-22.

Hypochondriasis is a morbid fear of having some serious illness, and normal bodily functions and sensations often get misinterpreted as indicating illness. Technically it is a subcategory of anxiety. Part of the trouble is such people also tend to be rather suggestible.

It’s a standing joke that medical students in training think they are dying of every illness they learn about. But the same problem can occur in suggestible patients looking things up. Or, as in Olly’s case, if they’ve got some app providing worrisome information. It can make you app-rihensive.

My belief is that patients should be empowered by being fully informed. And there has been a massive expansion of websites and apps to help people seeking health information. But “for hypochondriacs, the Internet has absolutely changed things for the worse," says Brian Fallon, MD, professor psychiatry at Columbia University and the co-author of Phantom Illness: Recognizing, Understanding and Overcoming Hypochondriaquoted on WebMD.

It is common and pervasive enough that these susceptible surfers have been given a name. “Cyberchondriacs,” he notes.

So how do we manage this conflict between people being informed, but also being so suggestible that they become convinced they have what they’re reading about?

One important rule is to go to reliable websites that will give you good information. The National Center for Complementary and Integrative Health (NCCIH) at nccih.nih.govgives good advice on assessing medical sites. And the Swiss organizationHealth on the Net Foundation, at www.hon.ch., provides certification for reliable sites.

Taking the information you find and discussing it with your doctor is also an important step as he or she should be able to help see the bigger picture and keep things in proportion – though hypochondriacle patients arriving with print outs, especially if it’s somewhat spurious information, can be the bane of a doctors life. It takes twice as long to disabuse a patient who is misinformed, than to give them the strait dope in the first place.

I told Olly, I didn’t think he was going to die. And urged him to take half one of the Valiums he had amongst the pharmacopeia in his bag, which he did. And took a nap, and was the picture of health and tranquility afterwards.

It might be unfair to think Olly too hypochondriacle. One significant factor in his case was that the pharmacist had mistakenly given him amitriptyline, an old style, tricyclic antidepressant, that can actually causeheart arrhythmias, instead of atenolol.

The lesson here is check your medicines when you get them.

Later we all tramped through the red mud of the Devon lanes, in a fine drizzle, to the Red Lion in Dittisham for a soothing pint, and discussed how much information is too much.

But I was tempted to delete his Preventicus app. 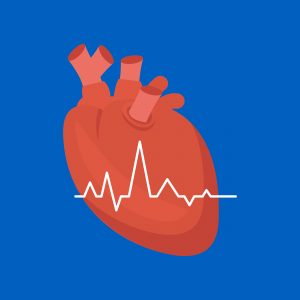