A short piece on the inside page of our local newspaper caught my attention. 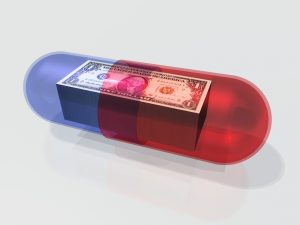 A judge in Annapolis had refused the injunction of the Association for Accessible Medicines to block a law allowing the Attorney General of Maryland to sue generic drug manufacturers that make an “unconscionable” increase in drug prices.

This may sound like just another round in the constant battle with shyster drug companies (companies like Turing that infamously bought the exclusive rights to the anti-toxoplasmosis drug, Daraprim, and jacked the price from $13.50 to $750 a pill).

But it’s significance is that this law is the first of its kind. The first law that allows some legal consequence for drug company price gouging. Providing protection for the hapless consumer who otherwise can do nothing but pay through the nose.

In an interview with Families USA, who backed this law, Vincent DeMarco and Matt Celentano, of the Maryland Citizen’s Health Initiative, and who lead the campaign to pass the bill noted “these are [generic] drugs that were developed decades ago, and consumers are getting exploited just to increase some pharmaceutical corporations’ profits.”

My impression is that many people in the US never consider that there could be some kind of legal control on the price of drugs in the US – as there is in other countries like Canada. And we just have to cough up what the drug companies demand.

And thus Americans pay many times as much as people in other countries for medicines*.

It’s “a heavy lift” however, notes DeMarco and Celentano referring to the work to battle the pharmaceutical industry. “The pharmaceutical companies are extremely powerful and they’re usually able to kill bills like this. But they weren’t able to this time because people are really feeling the pain, and because of Maryland Citizen’s Health Initiative’s excellent organizing skills.”

We all need to practice our organizational skills and beat on our legislators of other states to follow suit with Maryland.